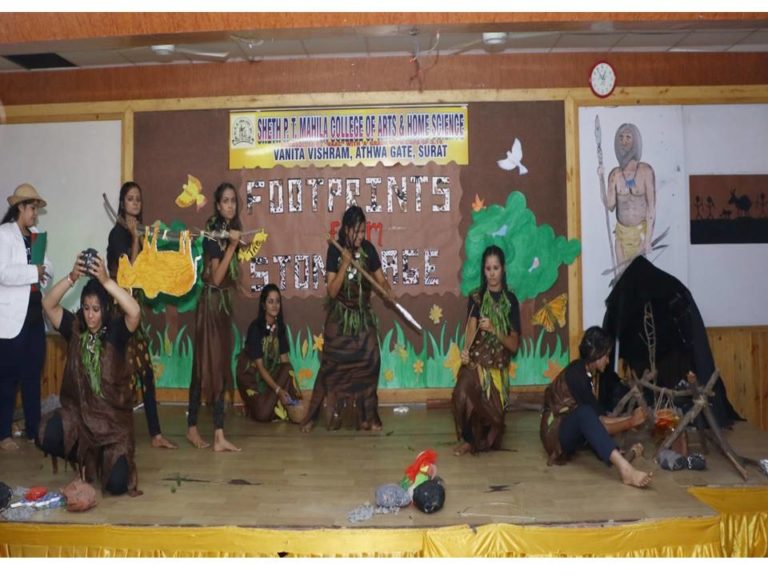 The Faculty of Arts organized “History Fest” on the theme “Footprints from the Stone Age” on 30th August, 2017. The Fest was organized with an objective to make students understand the significance of History in life and to draw similarities between the Primitive Age and the Modern Age. The students of ten renowned schools of Surat visited the Fest. The students of History performed a skit which depicted the life and times of the Primitive Man.

After the completion of the skit, the school students visited the Exhibition-stalls, which effectively depicted the connection between Stone Age and Modern Age. The visiting students gathered important information and interacted with the History Fest Volunteers who explained them about the various facts of the Stone Age in detail. 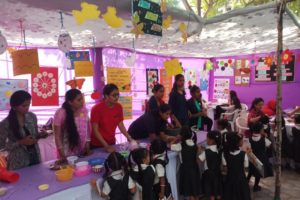 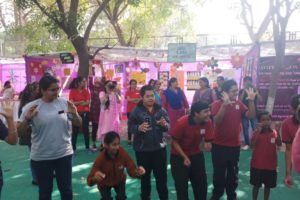 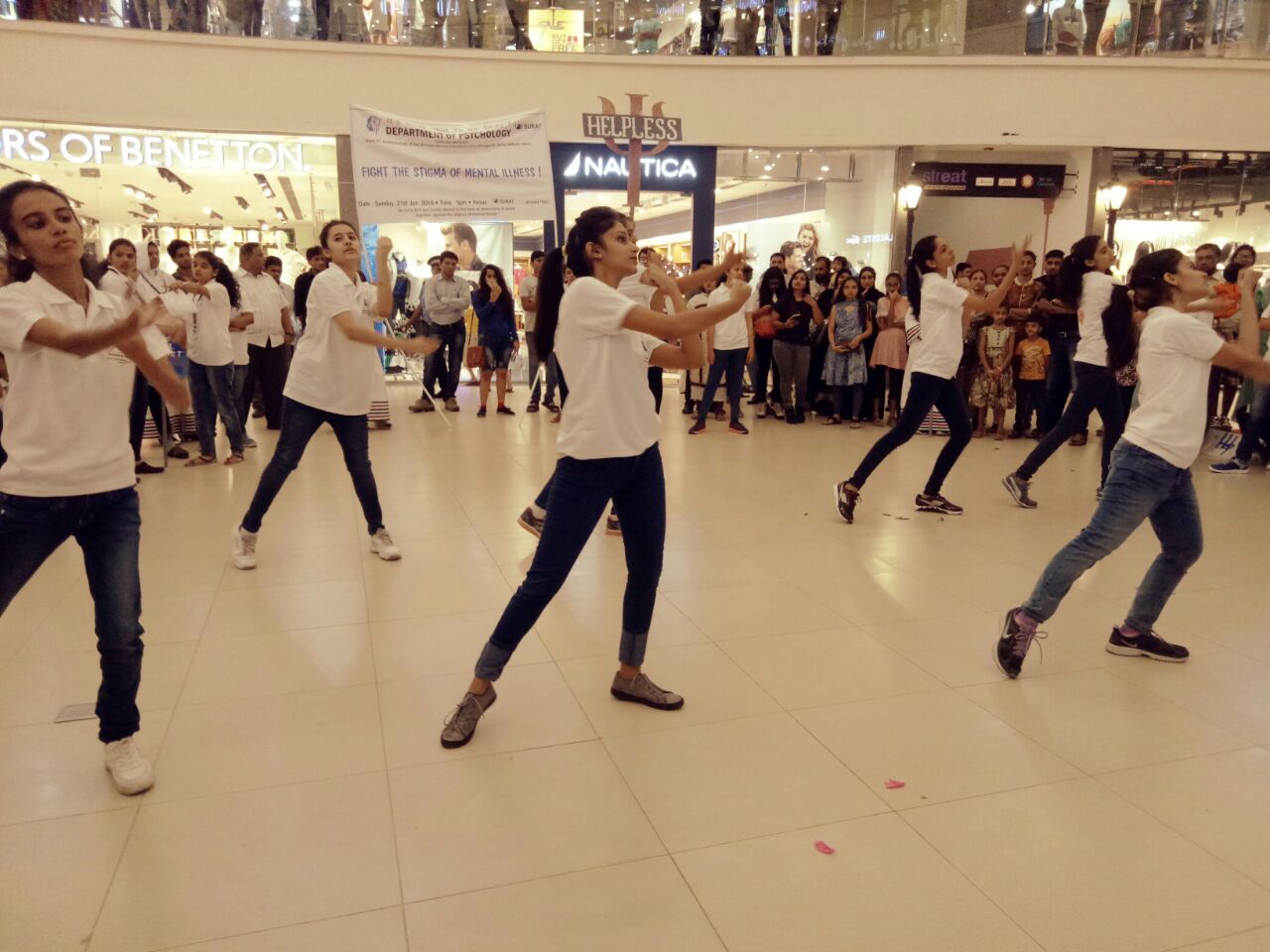 India, as a country, has come a long way.
Yet it has been dealing with many stigmas, one being the way people perceive mental health and to fight the stigma associated with mental health, the Department of Psychology, organized an event, A Flash Mob on Mental Health Awareness, on 21st January, 2018, at VR Mall, Surat.
The Flash Mob consisted of a dance performance by the fifty students from the Department of Psychology. The performance symbolized the status of Mental Health and how social support along with proper intervention may help its improvement.
Through the dance performance the journey of an individual going through stress, crisis, confusion, leading to depression and the feeling of helplessness and hopelessness followed by seeking help and social support, was depicted.
The Flash Mob was followed by a sensitizing message given by Asst. Prof. Aditya Farsole (Psychology) who addressed the audience that gathered around in the mall and focused on the stigma attached to mental health in India, and how people are hesitant to ask for help when it comes to mental health. The speech was concluded with an appeal.
“Let us all come together and fight against the stigma of mental health and it’s okay not to be okay.” 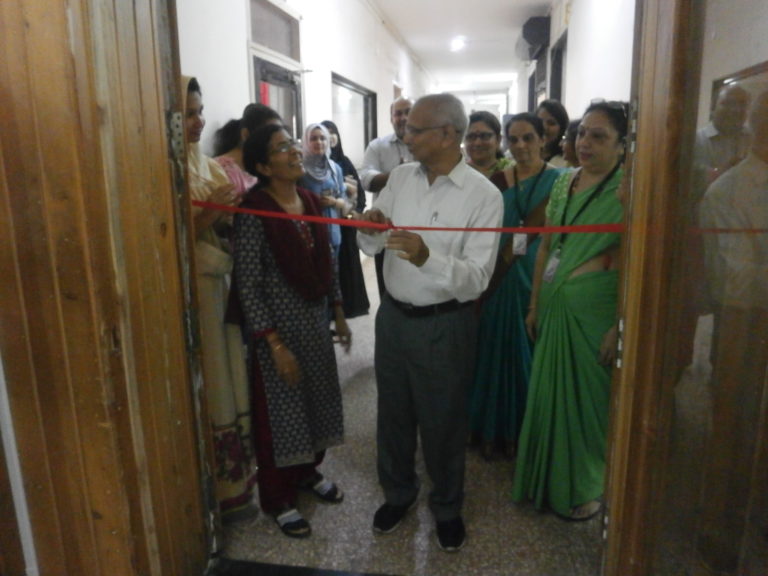 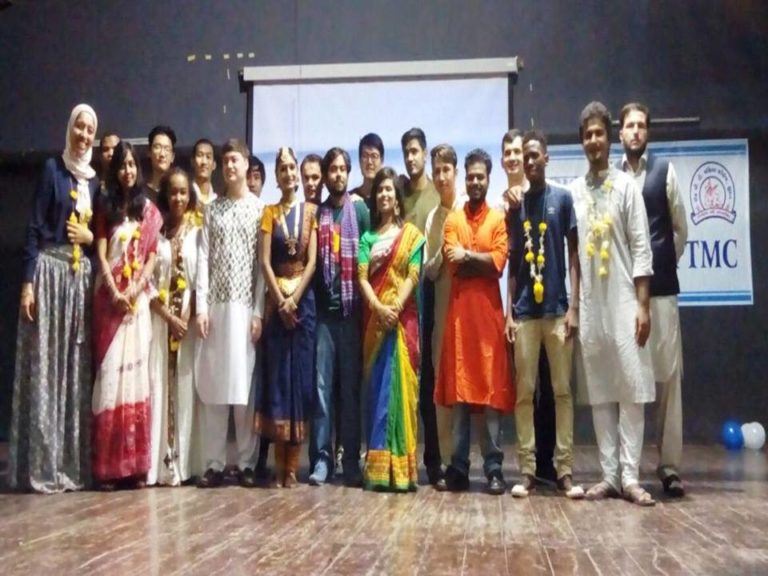 AIESEC, in collaboration with the college organized the “Global Village Event” on 9th August, 2017 in the Shivgauri Hall of Vanita Vishram campus.
The sole objective behind organizing “Global Village” was not merely to bring out cultural exchange for ensuring cultural harmony, but also to expose native students to a global culture and make them feel truly a world citizen.
The vision of going global brought fifteen people from different social, political, historical, cultural and economic backgrounds from seven different countries under one roof.
The College hosted an event in which nearly, twenty colleges of the Surat city were invited to be a part of this cultural celebration.
Approximately, 200-250 students participated in this event which showcased the cultures of countries like Afghanistan, Bangladesh, Botswana, China, Egypt, Ethiopia etc. AIESEC, SPTMC also hosted one of the interns named Ms. Mayar Hamza from Egypt, who stayed for a month and involved herself in various activities and academics of the college.

The whole intent behind organizing the said programme was to offer a space, a public forum to interact, share and connect students to the visiting internationals, and thereby expand their horizons of knowledge and understanding.
The event received comprehensive coverage from local media, newspapers, news channels and social networking sites.
The entire team of AIESEC, SPTMC collaborated with AIESEC, Surat in order to make this event successful.